The Ultimate Dinosaur Wiki
Register
Don't have an account?
Sign In
in: Dinosaurs, Cretaceous Dinosaurs, Dinosaurs of Asia,
and 4 more

Back to page
View source

Velociraptor is one of the most well-known dinosaurs. It lived in Mongolia, Asia, 75 million years ago.

Velociraptor hunted in packs to bring down larger prey, but it didn't pack-hunt as much as raptors like Deinonychus. They could have attacked a Protoceratops alone or in a pair. Like all raptors, it had a sickle claw on the second toe of each foot, controlled by powerful muscles, to rip open the prey animal's stomach. It also had jaws full of needle-sharp teeth 26-28 per side, and its

One of the most amazing fossils ever uncovered is of aProtoceratops and a Velociraptor, locked in a death struggle. The Protoceratops is biting the Velociraptor's hand with its beak, and the Velociraptor is slashing at the Protoceratops' neck with its sickle claw, probably trying to pierce vital organs, eg the windpipe. They were presumably fighting in the desert, and them both killed rapidly by a sandstorm or something of the sort. It is unlikely to be a flash flood, if this was the case then the bones would probably have been washed apart.

Also, Velociraptor fossils have been found with quill knobs on the arms, suggesting feathers were present.

It all started with Jurassic Park, when Velociraptors were depicted twice their true size, featherless, and with a shorter snout. Since then Velociraptor has appeared in almost all dinosaur-related media, usually shown as how Jurassic Park did. Some, however, do portray the creature correctly. 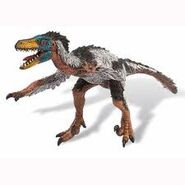 A restoration of a feathered Velociraptor

A Velociraptor in Jurassic Park 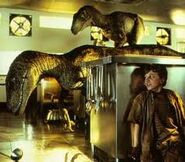